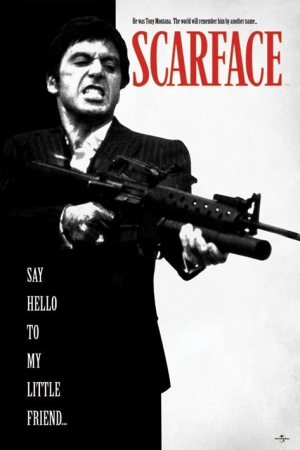 Brian De Palma’s blood-and-sun-drenched saga of a Cuban deportee’s rise to the top of Miami’s cocaine business has become something of a popular classic since its release; it’s been referenced in rap songs and subsequent gangster movies and quoted the world over. Despite this lovefest with the dialogue, the film’s brutal violence and lack of positive characters still make it controversial and disliked by certain critics. Al Pacino stars as Tony Montana, whose intelligence, guts, and ambition help him skyrocket from dishwasher to the top of a criminal empire but whose eventual paranoia and incestuous desire for his kid sister (Mary Elizabeth Mastrantonio) prove his undoing. Michelle Pfeiffer plays Tony’s neglected coke-addicted trophy wife, and Steven Bauer is his concerned friend. F. Murray Abraham, Robert Loggia, and Paul Shenar are some of Tony’s sleazy business partners and potential killers. Oliver Stone wrote the expletive-packed screenplay, based on Howard Hawks’s 1932 version–which was ostensibly about Al Capone and starred Paul Muni and George Raft. The synth-heavy Giorgio Moroder score expertly evokes the drug-fueled decadence of 1980s Miami, and De Palma provides several of his elaborate set pieces, including a horrific showstopper in a motel room with a chain saw.