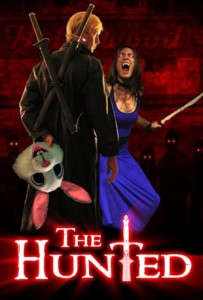 A struggling actor in Hollywood is mistaken for the “Chosen One”, foretold to lead a group of misfit slayers against an army of vampires.

“…does for reluctant vampire slayers what Deadpool did for foul-mouthed mercenaries…” – IMPACT Magazine.

DON’T RENT, BUY! Every dollar we make on Vimeo goes towards distribution on larger streaming platforms like Neflix, Hulu, Itunes and Film Festivals. Owning the film will also give you access to extras as they become available (Behind the Scenes, etc). Thanks for your support!

Based on the longest running series online, The Hunted is also the first original series based on user content, which means episodes can be shot by virtually anyone anywhere. Join us online at thehunted.tv, create your own episode and win $1000.

“A Pioneer in the Latest Action Frontier” – IMPACT Magazine
“A Refreshing Spin on the Vampire Mythos” – Comic Book Bin
Be sure to also rate and review on IMDB, you rock! imdb.com/title/tt2322932/combined