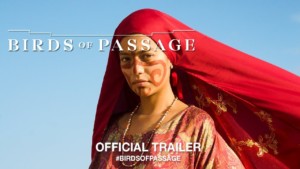 Set in Colombia in the 1970s, right when the demand for marijuana is set to explode, Ciro Guerra’s follow-up to his Oscar-nominated Embrace of the Serpent ditches the black and white aesthetic of his previous film for the colorful world of the Guajira desert. Yet again, though, he’s set his sights (alongside co-director and producer Cristina Gallego) on a story about the way Colombian history intersects with its indigenous population. Birds of Passage follows an Wayuu indigenous family who takes a leading role in the budding new drug trade, and discovers the perks of wealth and power, but with a violent and tragic downside.