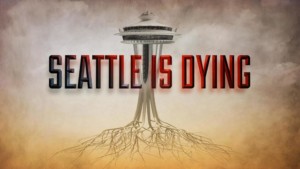 KOMO’s Eric Johnson explores the impact the drug and homelessness problem is having on our city and possible solutions in “Seattle is Dying.” TV documentary about Seattle’s homeless crisis. The Seattle area is experiencing a homelessness crisis as we struggle to get people off the streets and out of encampments.

Seattle has a relatively mild climate where it’s possible to survive the elements a large part of the year, particularly if you have a tent and sleeping bag.

Seattle is one of America’s most liberal cities, and there are many more shelters and social programs for the homeless here than in others. A lot of bleeding hearts live here and hold power here politically, and no one wants to be seen as a heartless person who would crack down on disenfranchised people who are sick, mentally ill, drug addicted or down on their luck.

Many other cities know Seattle has these resources and support systems and so they actually send their homeless here. I’ve done volunteer work with the homeless over the years, and a surprising number were arrested in another city for vagrancy and given a one-way bus ticket to Seattle. So basically America is shipping its homeless problem to Seattle to deal with. We attract them and enable them, many of them openly admit this.