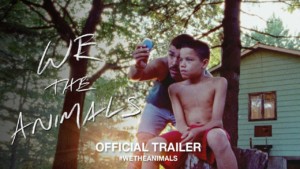 Us three, brothers, kings inseparable. Manny, Joel, and Jonah tear their way through childhood. Their parents (Sheila Vand and Raul Castillo) have a volatile love that makes and unmakes the family many times over, leaving the boys fending for themselves. As their parents rip at one another, Manny and Joel ultimately harden and grow into versions of their father. With the triumvirate fractured, Jonah—the youngest, the dreamer—becomes increasingly aware of his desperate need to escape. Driven to the edge, Jonah embraces an imagined world all his own. With a screenplay by Dan Kitrosser and Jeremiah Zagar based on the celebrated Justin Torres novel, We the Animals is a visceral coming-of-age story propelled by strikingly layered performances from its astounding cast, elements of magical realism, and unbelievable animated sequence.