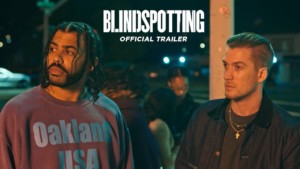 Follow the journey of two best friends in the genre-defying film, “Blindspotting.” Collin (Daveed Diggs) is a convicted felon who struggles to get his life back on track. Collin and his best friend, Miles (Rafael Casal), work together as movers in increasingly gentrified Oakland. Both men confront their surroundings with gritty wit, but start to face their reality in different skin as Collin witnesses a police shooting just days before his year-long probation ends. Dramatic, yet humorous, “Blindspotting” provides an insight into class conflict, police brutality, and systematic oppression in the United States.

“The ultimate success of Blindspotting comes down to the intensity of emotion percolating beneath each scene, with Diggs’ face exuding fury for an unjust world that has no use for his goodwill.” – Eric Kohn, IndieWire

“Blindspotting is a force to be reckoned with in terms of experience, anger and boiled frustrations that beg anyone watching to lead the charge for change.” – Matt Donato, We Got This Covered

The Twilight Zone: “The Comedian”